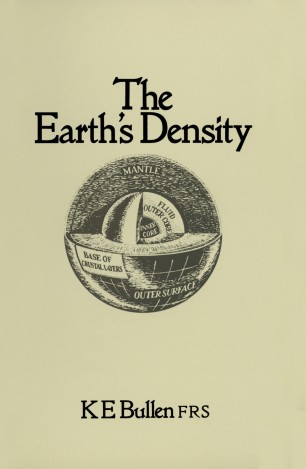 The book attempts to draw together the various strands of evidence that have led to present knowledge of the distribution of density throughout the interior of the Earth. Details are also given of other properties with which the density is closely linked, including pressure, compressibility and compression, rigidity, seismic velocities, Poisson's ratio and gravitational intensity. Questions of thermodynamics and chemical composition and phase enter discussions where they bear more or less sharply on the density determination; but the book does not purport to be a comprehensive text on the Earth's internal tem­ perature distribution and composition. The density distributions of other planets are discussed. The quest for clues on the Earth's internal densities has long been an exciting one, and an aim of the book is to present a developing story which has fascinated the author over much of his worl(ing life. The early chapters refer to key developments from ancient times to around 1930. The later chapters recount, in greater detail, develop­ ments since 1930. The stage has now been reached where numerous published papers bearing on the Earth's density seem to do little more than fidget around the resolving power of long accumulated observational data. So the present seems an appropriate time to try to put some perspec­ tive into the story. Of course, the story will never be quite finished: in describing the interior of the Earth, there will always be extra decimal places to add as further significant evidence arises.