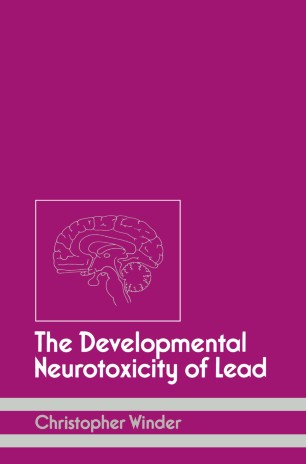 The Developmental Neurotoxicity of Lead

Over the past two millennia environmental lead levels have risen dramatically (Patterson, 1980). Most of this increase has occurred since the beginning of the present century (Murozami et 01. , 1969), and taken into perspective, a typical individual living in the industrialized world sustains a lead burden 500 times that of his prehistoric ancestors (Patterson, 1983). Lead is unique in being an environmental pollutant where the levels deemed clinically toxic are less than an order of magnitude from those that are normally encountered in the population. The clinical limit for lead exposure, 70 JLg Pb/tOO ml blood, is about three times the 'normal' value (in the range 15-30 JLg Pb/100ml blood). This small difference is remarkable from the toxicological standpoint. The key concept here is control of dis­ persal. The industrial actions of man bring contact with a wide variety of substances, some of which are poisonous or dangerous. In such cases pro­ tective measures are taken to keep hazardous exposure to a minimum. In the of lead compounds, stringent regulations are production and distribution enforced. The exception to this is in the dispersal of lead from vehicle exhausts following purchase from the petrol pump. Perhaps man's long­ standing acquaintance with lead in home and industry is responsible for a complacency which until only recently has been unquestioned. Beginning in the late 1960s, evidence began to accumulate suggesting that lead at relatively low levels of exposure might be causing negative effects on neurobiological function.