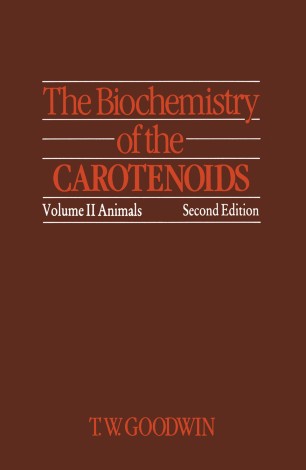 The Biochemistry of the Carotenoids

des Plantes (Hermann, Paris), and in 1935 by Lederer's Les Carotenoides des Animaux (Hermann, Paris). Since then a survey such as the present one has not appeared. In order to present a full picture, much of the pre-1934 work has been reconsidered and, as far as is known, every important contribution which has appeared since that date has been discussed. Two peripheral aspects ofthe subject have, however, been omitted, namely (a) the qualita­ tive and quantitative changes which the carotenoids of plant materials undergo in storage or during processing into food and (b) the carotene (pro-vitamin A) requirements of different animal species; it was felt that the former, about which a great deal has been written, was too technological to be suitable for inclusion in the present volume, whilst the latter is more suitable for a monograph on vitamin A. The very wide distribution of the carotenoids in Nature suggests that, in spite of the superficially diverse functions ascribed to them in different living tissues, there may be some factor or property through which all these functions will eventually be correlated; any suggestion as to the nature of this common property can perhaps come most readily from a comparative approach. Apart from critically surveying the literature this book has been constructed so as to focus attention on comparative data and their possible implications.