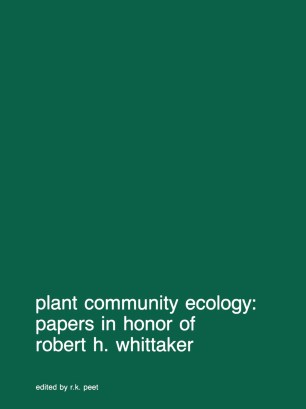 R. K. Peet Dep. of Botany, University of North Carolina, Chapel Hill, N. C. 27514, USA Robert Whittaker's contributions to ecology were many and remarkably varied. His publication record will long stand as a monument to his greatness, and whatever we do to honor him will likely be rather small in comparison. Less well known were his personal interactions and the impact they had on the development of ecology as well as individual scientists. Over the years he touched many of us and we felt not just a professional but also a deep personal loss in his passing. After his death I was contacted by numerous colleagues who wondered what they might do to honor him. Whittaker had long served on the editorial board of Vegetatio, which prompted Eddy van der Maarel to suggest that a series of papers in the journal might be a fitting memorial, and so this project was conceived. Whittaker was a master of synthesis and during his career he published numerous review papers which showed clearly how his work related to and built on that of others. For this reason it seemed inappropriate and redundant to solicit papers reviewing areas to which Whittaker made important contributions. Instead, I chose to solicit research papers illustrating current applications of approaches Whittaker developed and showing a few of the recent advances which have grown directly from his pioneering work.