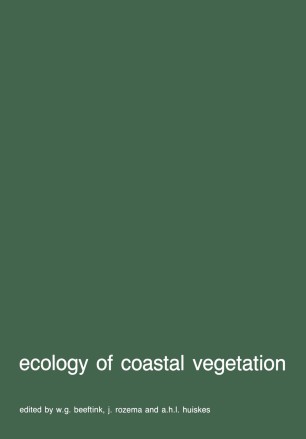 This book is the result of a symposium dedicated to the 25th anniversary of the Delta Institute for Hydrobiological Research in Yerseke, the Netherlands. The primary idea did not come from one of the scientists working in this Institute, but from the second editor. Long before the Institute celebrated itsjubilee on 20-23 October 1982, he expressed his feelings to the other editors, that the time had come for a second European symposium on the ecology of coastal vegetation. The first symposium on this theme was held in Norwich, 12-16 September 1977, being the first meeting of the European Ecological Symposium. He only So the working group Salt waited for a suitable opportunity. Well, the 25th anniversary was a good one. Marsh Ecosystems of the Delta Institute, in close collaboration with him, adopted Dr. Rozema's initiative and set about realizing his idea. An organising committee composed of the editors of this volume, planned the scope of the meeting.