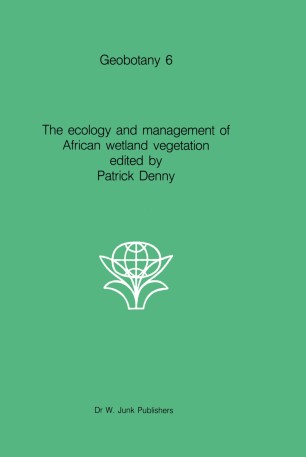 The ecology and management of African wetland vegetation

A botanical account of African swamps and shallow waterbodies

Interest in the biology of African 'wetlands' was initiated in the last century with the hypothesis that Lake Tanganyika was once part of a Jurassic sea, and was furthered by Cunnington's expedition at the beginning of this century which proved that it was not. In the late 1920's, ecological studies, encouraged by the growing importance of inland fisheries, were started hy British, French and Belgian biologists. Some twenty years later several government limnological research centres and fishery departments were established in tropical Africa, and scientific progress was accelerated. Scientific collaboration between the regions south of the Sahara was started formally in 1951 by the Scientific Council for Africa and stimulated by the International Biological Programme (1964-74) with its emphasis on biological productivity. Some of its interests were takcn on by SCOPE which recently selected continental wetlands as a Special Project; hence this book. The five authors, with-Patrick Denny as editor, have made a very valuable contribution both to science and to thc management of Africa's natural rcsourccs: thcy have filled a gap in the synthesis of knowledge about Africa's environments which is long overdue. The term 'wetland' is used today in several different contexts. For this purpose, it excludes the seas and large open inland waters. which are too deep for rooted plants, but includes the huge areas of floodplains and dambos which may change seasonally from standing water to very dry lands.