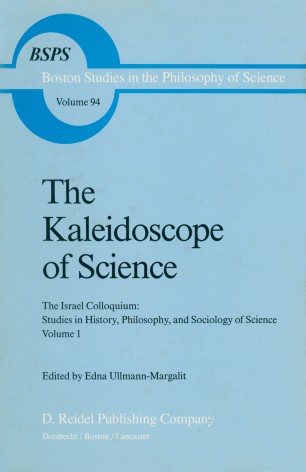 The Kaleidoscope of Science

The Israel Colloquium: Studies in History, Philosophy, and Sociology of Science Volume 1

Part of the Boston Studies in the Philosophy of Science book series (BSPS, volume 94)

This collection is the first proceedings volume of the lectures delivered within the framework of the Israel Colloquium for the History, Philosophy and Sociology of Science, in its year of inauguration 1981-82. It thus marks the beginning of a new venture. Rather than attempting to express an ideology of the l}nity of science, this collection in fact aims at presenting a kaleidoscopic picture of the variety of views about science and within science. Three main disciplines come together in this volume. The first of scientists, the second of historians and sociologists of science, the third of philosophers interested in science. The scientists try to present the scientific body of knowledge in areas where the scientific adventure kindles the imagination of the culture of our time. At the same of course, they register their own reflections on the nature of this body time, of knowledge and on its likely course of future development. For the historians and sociologists, in contrast, science is there to be studied diachronically, as a process, on the one hand, and synchronically, as a social institution, on the other. As for the phil9sophers, finally, their contribution to this series is not meant to remain within the confines of what is usually seen as the philosophy of science proper, or to be limited to the analysis of the scientific mode of reasoning and thinking: it is allowed, indeed encouraged, to encompass alter­ native, and on occasion even competing, modes of thought.