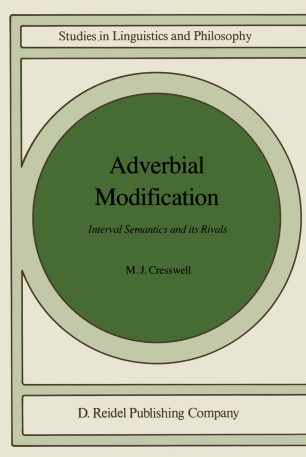 Interval Semantics and Its Rivals

Part of the Studies in Linguistics and Philosophy book series (SLAP, volume 28)

Adverbial modification is probably one of the least understood areas of linguistics. The essays in this volume all address the problem of how to give an analysis of adverbial modifiers within truth-conditional semantics. Chapters I-VI provide analyses of particular modifiers within a possible­ worlds framework, and were written between 1974 and 1981. Original publication details of these chapters may be found on p. vi. Of these, all but Chapter I make essential use of the idea that the time reference involved in tensed sentences should be a time interval rather than a single instant. The final chapter (Chapter VII) was written especially for this volume and investigates the question of how the 'situation semantics' recently devised by Jon Barwise and John Perry, as a rival to possible-worlds semantics, might deal with adverbs. In addition I have included an appendix to Chapter III and an introduction which links all the chapters together.