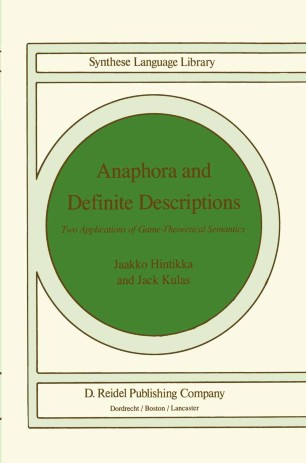 I n order to appreciate properly what we are doing in this book it is necessary to realize that our approach to linguistic theorizing differs from the prevailing views. Our approach can be described by indicating what distinguishes it from the methodological ideas current in theoretical linguistics, which I consider seriously misguided. Linguists typically construe their task in these days as that of making exceptionless generalizations from particular examples. This explanatory strategy is wrong in several different ways. It presupposes that we can have "intuitions" about particular examples, usually examples invented by the linguist himself or herself, reliable and sharp enough to serve as a basis of sharp generalizations. It also presupposes that we cannot have equally reliable direct access to general linguistic regularities. Both assumptions appear to me extremely dubious, and the first of them has in effect been challenged by linguists like Dwight Bol inger. There is also some evidence that the degree of unanimity among linguists is fairly low when it comes to less clear cases, even in connection with such relatively simple questions as grammaticality (acceptability). For this reason we have tried to rely more on quotations from contemporary fiction, newspapers and magazines than on linguists' and philosophers' ad hoc examples. I also find it strange that some of the same linguists as believe that we all possess innate ideas about general characteristics of humanly possible grammars assume that we can have access to them only via their particular consequences.

`Unlike previous work, (Hintikka and Kulas') theory offers a unified account of intrasentential and discourse anaphora, including deictic uses of anaphoric elements. Further, it deals with the well-studied syntactic constraints on anaphora while at the same time providing a precise truth-conditional semantics. In terms of comprehensiveness and theoretical elegance, this work sets a new standard for the study of anaphora.'
Tom Wasow, Center for the Study of Language and Information, Stanford University
Buy options