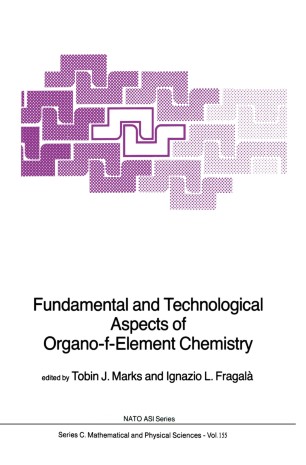 The past decade has seen a dramatic acceleration of activity and interest in phenomena surrounding lanthanide and actinide organo­ metallic compounds. Around the world, active research in organo-f­ element synthesis, chemistry, catalysis, crystallography, and quantum chemistry is in progress. This activity has spanned a remarkably wide range of disciplines, from synthetic/mechanistic inorganic and organic chemistry to radiochemistry, catalytic chemistry, spectroscopy (vibra­ tional, optical, magnetic resonance, photoelectron, Mossbauer), X-ray and neutron diffraction structural analysis, as well as to crystal field and molecular orbital theoretical studies at the interface of chemistry and physics. These investigations have been motivated both by fundamental and applied goals. The evidence that f-element organo­ metallic compounds have unique chemical and physical properties which cannot be duplicated by organometallic compounds of d-block elements has suggested many new areas of endeavor and application. For these reasons, a great many scientists felt the need for some international forum devoted exclusively to the subject of lanthanide and actinide organometallic compounds. In September of 1978, a NATO Advanced Study Institute entitled, "Organometallics of the f-Elements," was held at the SOGESTA Conference Center near Urbino, Italy. It was the universal feeling of the partic­ ipants that this first meeting was a great success and that vital international communication and collaboration had been stimulated. The principal lectures at this Institute were published by Reidel in 1979 as part of the NATO ASI Monograph Series ("Organometallics of the f-Elements," T. J. Marks and R. D. Fischer, editors).