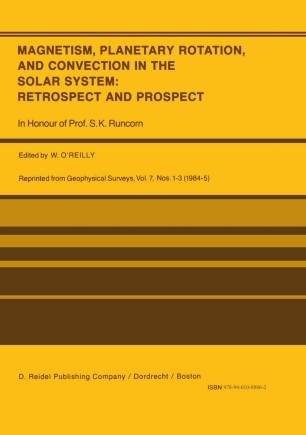 Magnetism, Planetary Rotation, and Convection in the Solar System: Retrospect and Prospect

In Honour of Prof. S.K. Runcorn

On the 6th, 7th' and 8th April 1983, a conference entitled "Magnetism, planetary rotation and convection in the Solar System" was held in the School of Physics at the University of Newcastle upon Tyne. The purpose of the meeting was to celebrate the 60th birthday of Prof. Stanley Keith Runcorn and his, and his students' and associates', several decades of scientific achievement. The social programme, which consisted of excursions in Northumberland and Durham with visits to ancient castles and churches, to Hexham Abbey and Durham Cathedral, and dinners in Newcastle and Durham, was greatly enjoyed by those attending the meeting and by their guests. The success ofthe scientific programme can be judged by this special edition of Geophysical Surveys which is derived mainly from the papers given at the meeting. The story starts in the late 1940s when the question of the origin of the magnetic field of the Earth and such other heavenly bodies as had at that time been discovered as having a magnetic field, was exercising the minds of several scientists; notably P. M. S. Blackett at Manchester, W. M. Elsasser at the University of Pennsylvania and E. C. Bullard at Cambridge. Two alternative mechanisms were proposed. In one the magnetic field was in some way connected with the distributed angular momentum of a rotating body; in the other, electric currents in conducting parts within the body were proposed as the source of magnetic field.