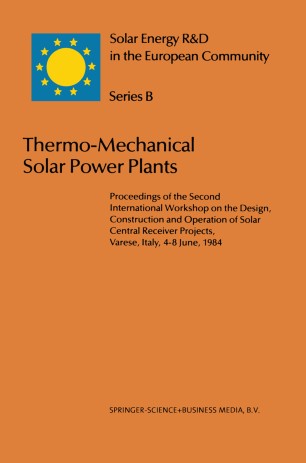 Proceddings of the Second International Workshop on the Design, Construction and Operation of Solar Central Receiver Projects, Varese, Italy, 4–8 June, 1984

In this book, the Commission of the European Communities presents the proceedings of the Workshop on Solar Central Receiver Projects, held in Varese, I taly , in June 1984. This Workshop was supported by all operators of solar tower power plants around the world and, as a result, these proceedings provide a comprehensive overview of the technology in its current state of development. The Workshop was organized by the Commission of the European Communities in the frame of the second solar energy R&D programme under the responsibility of its Di rectorate-General (X 11) for Science, Research and Development in Brussels. The meeting place, Varese, in Italy, was selected because of its neighbourhood to the Ispra Establishment of the Commission's Joint Research Centre who cooperated in the organization of the Workshop. Solar power plants of the central receiving type have two conflicting characteristics: they employ very simple and classical components but as a system they are of tremendous complexity. It was the hope for rapid progress by using available components that guided the decisions taken in the late seventies to build six large experimental plants: four in Europe, one in Japan and one in the United States. At that time, this technology enjoyed high priority in solar energy R&D around the world. Once the plants were completed, however, it became clear that the technical complexity combined with difficult meteorological conditions at most construction sites made the yields less favourable than anticipated.