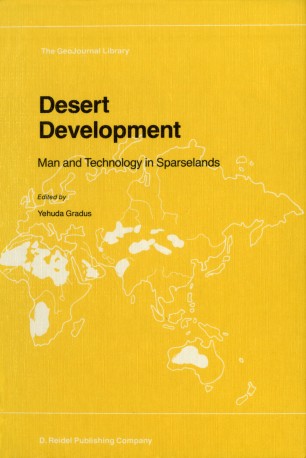 Man and Technology in Sparselands

Part of the The GeoJournal Library book series (GEJL, volume 4)

The fact that approximately one-third of the world's land mass is arid desert may be congenial for the camel and the cactus, but not for people. Nevertheless, well over half a billion people, or 15% of the world's population live in arid desert areas. If the world's population were distributed evenly over the land surface, we would expect to find about 30% of the population inhabiting arid desert areas. Does the fact that 'only' 15% of the world's population live in an arid desert environment reflect the harshness of the environment? Or is it a testimony to the adaptability and ingenuity of mankind? Do we view the glass as half-full? Or half-empty? The contributors to Desert Development: Man and Technology in Sparselands adopt the position that the cup is half-full and, in fact, could be filled much more. Indeed, many arid desert zones do thrive with life, and given appropriate technological develop­ ment, such areas could support even greater popUlations. While the dire Malthusian prediction that rapid world population growth exceeds the carrying capacity of existent resource systems has gained popularity (typified by the 1972 Club of Rome book, Limits to Growth), there is a growing body of serious work which rejects such pessimistic 'depletion' models, in favor of models which are mildly optimistic.