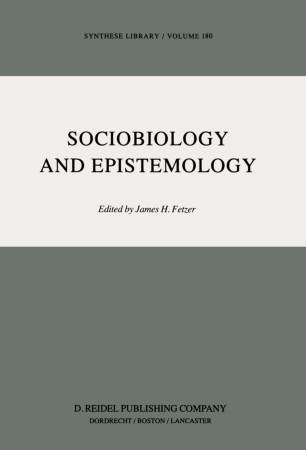 The papers presented in this special collection focus upon conceptual, the­ oretical and epistemological aspects of sociobiology, an emerging discipline that deals with the extent to which genetic factors influence or control patterns of behavior as well as the extent to which patterns of behavior, in turn, influence or control genetic evolution. The Prologue advances a compre­ hensive acco/unt of the field of gene-culture co-evolution, where Lumsden and Gushurst differentiate between "classical" sociobiology (represented especially by Wilson's early work) and current research on human socio­ biology (represented by Lumsden and Wilson's later work), which emphasizes interplay between genes, minds, and culture. The specter of genetic deter­ minism, no doubt, has created considerable controversy, some of which may be laid to rest by Hanna's analysis of the (ambiguous) notion of a "genetic program", which indicates the necessity for distinguishing between descriptive and prescriptive dimensions of this complex concept. Brandon offers a framework for assessing the respective contributions of nature and of nurture by advancing a means for measuring genetic and cultural influences upon "inheritance", which supports the conclusion that evolving patterns of behavior do not always maximize inclusive fitness, contrary to what socio­ biologists have claimed. The influence of culture upon genetic evolution, of course, can be adequately appraised only when a suitable account of culture itself has been found, a desideratum Smillie attempts to satisfy by utilizing the notion of "cinfo" as culturally transmitted ecological informa­ tion, a resource other species tend not to exploit.