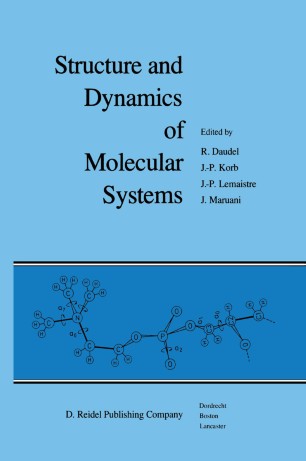 Structure and Dynamics of Molecular Systems

Part of the Structure and Dynamics of Molecular Systems book series (SDMS, volume 1)

This volume is the first of a set of two which contain the invited lectures given at the international seminar of the same title held at the Centre de Mecanique Ondulatoire Appliquee du Centre National de la Recherche Scientifique in Paris (France) from October 1983 to May 1985. They are intended to provide a survey of topics of current interest relative to the structure and the dynamics of molecular systems. The papers have been selected on the basis of their relevance to the following four topics: i) molecular conformations and transformations; ii) molecular relaxation and motion; iii) charge, spin and momentum distributions in molecular solids; iv) collective phenomena in condensed matter. The first volume deals f)1ostly with the first two topics, the second volume mostly with the last two. Each volume consists of about fifteen self­ contained, reference contributions covering recent achievements in active branches of molecular physics and physical chemistry. The first four papers of the present volume deal with theoretical aspects of structure and reactivity problems, with particular attention being paid to topology considerations, which have joined symmetry con­ siderations as an important tool in approaching chemistry problems. The treatment of nuclear probability density distributions is performed on a model basis for a simple system, even though it has come to the attention of theoreticians through experimental results for complex systems.