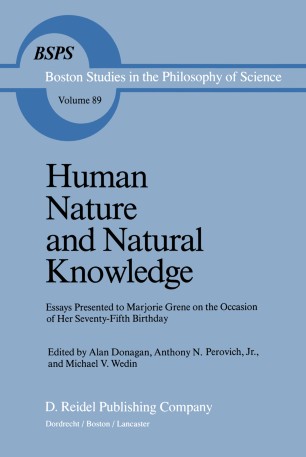 Part of the Boston Studies in the Philosophy of Science book series (BSPS, volume 89)

Everybody knows Marjorie Grene. In part, this is because she is a presence: her vividness, her energy, her acute intelligence, her critical edge, her quick humor, her love of talking, her passion for philosophy - all combine to make her inevitable. Marjorie Grene cannot be missed or overlooked or undervalued. She is there - Dasein personified. It is an honor to present a Festschrift to her. It honors philosophy to honor her. Professor Grene has shaped American philosophy in her distinc­ tive way (or, we should say, in distinctive ways). She was among the first to introduce Heidegger's thought ... critically ... to the American and English philosophical community, first in her early essay in the Journal of Philosophy (1938), and then in her book Heidegger (1957). She has written as well on Jaspers and Marcel, as in the Kenyon Review (1957). Grene's book Dreadful Freedom (1948) was one of the most important and influential introductions to Existentialism, and her works on Sartre have been among the most profound and insightful studies of his philosophy from the earliest to the later writings: her book Sartre (1973), and her papers 'L'Homme est une passion inutile: Sartre and Heideg­ ger' in the Kenyon Review (1947), 'Sartre's Theory of the Emo­ tions' in Yale French Studies (1948), 'Sartre: A Philosophical Study' in Mind (1969), 'The Aesthetic Dialogue of Sartre and Merleau-Ponty' in the initial volume of the Journal of the British Society for Phenomenology (1970), 'On First Reading L'Idiot de