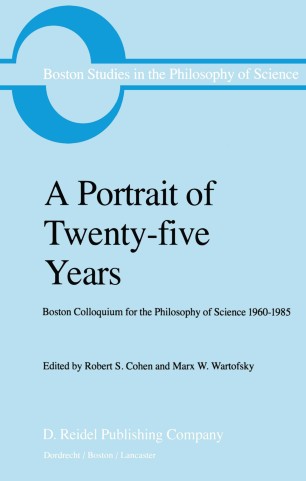 A Portrait of Twenty-five Years

Boston Colloquium for the Philosophy of Science 1960–1985

The Boston Colloquium for the Philosophy of Science began 2S years ago as an interdisciplinary, interuniversity collaboration of friends and colleagues in philosophy, logic, the natural sciences and the social sciences, psychology, religious studies, arts and literature, and often the celebrated man-in-the­ street. Boston University came to be the home base. Within a few years, pro­ ceedings were seen to be candidates for publication, first suggested by Gerald Holton for the journal Synthese within the Synthese Library, both from the D. Reidel Publishing Company of Dordrecht, then and now in Boston and Lancaster too. Our colloquium was inheritor of the Institute for the Unity of Science, itself the American transplant of the Vienna Circle, and we were repeatedly honored by encouragement and participation of the Institute's central figure, Philipp Frank. The proceedings were selected, edited, revised in the light of the discussions at our colloquia, and then other volumes were added which were derived from other symposia, in Boston or elsewhere. A friendly autonomy, in­ dependent of the Synthese Library proper, existed for more than a decade and then the Boston Studies became fully separate. We were grateful to Jaakko Hintikka for his continued encouragement within that Library. The series Boston Studies in the Philosophy of Science was conceived in the broadest framework of interdisciplinary and international concerns. Natural scientists, mathematicians, social scientists and philosophers have contributed to the series, as have historians and sociologists of science, linguists, psychologists, physicians, and literary critics.