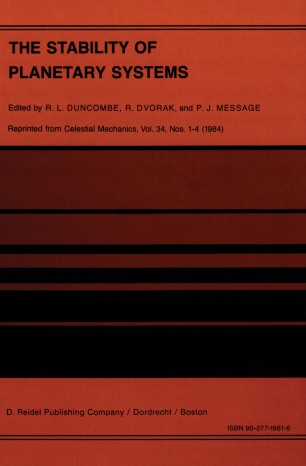 The Stability of Planetary Systems

The Alexander von Humboldt Colloquium on Celestial Mechanics (sub­ titled "The Stability of Planetary Systems") was held in Ramsau, Styria, in the Austrian Alps, from March the 25th to the 31st, 1984. The dedication of the meeting to Alexander von Humboldt presented partici­ pants with the challenge that the discussions during the week should reflect the spirit of that great scientist of the last century, that the very many interesting ideas presented and developed during the sessions should be interpreted in the light of a broad v~ew of astron­ omy and astrophysics. The topics of the meeting ranged from astrometric questions relating to the specification of inertial reference systems, motion of planets (including minor planets) and satellites, with the recurring topic of the search for criteria of stability of the systems, resonances, periodic orbits, and to the origin of the systems. Each session began with one or more invited review papers, followed by offered contributions and discussion. Three evening discussions were held, devoted respectively to inertial systems, to numerical integration techniques, and to cosmogonic problems and ring systems. On the evening of Wednesday, March 28th, a recital of chamber mus~c was given by Bernhard Piberauer, on the violin, and Meinhard Prinz, on the piano.