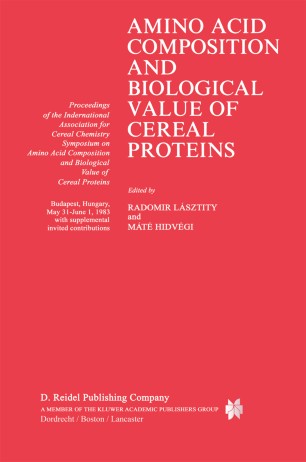 Proceedings of the International Association for Cereal Chemistry Symposium on Amino Acid Composition and Biological Value of Cereal Proteins Budapest, Hungary, May 31–June 1,1983

Cereals belong to the most important elements in the history of mankind. From the beginning of agriculture, cereals have been by far the most important staple food in the world. Although the cereal consumption decreased to a low level in the developed countries in Europe and North America, in the devel­ oping countries over two-thirds of the calorie and protein intake is based on cereals. A substantial quantity of cereals goes indirectly into food via feed to animals. Generally, cereal proteins are classified as proteins of lower biological value because of shortage in lysine and some other essential amino acids. Recent developments in the de­ termination and evaluation of the biological value of proteins and protein mixtures suggest that the oversimplified earlier evaluation of cereal proteins must be reviewed. This book contains the edited proceedings of the Inter­ national Symposium on "Amino Acid Composition and Biological Value of Cereal Proteins", held in Budapest, Hungary, Hay 31- June 1, 1983, under the sponsorship of the International Association for Cereal Chemistry, Hungarian Scientific Society for Food Industry and Grain Trust, Hungary, with supplemental invited contributions. Scientists (biologist, plant breeders, farmers, chemists, biochemists, engineers, food technologists and nutritionists) from 17 countries presented and reviewed, along with partici­ pants from 20 countries, the recent methodology and trends in the determination of the biological value of cereal proteins, v the amino acid composition of cereal proteins and factors in­ fluencing the composition and the role of cereal proteins in nutrition and animal feeding.