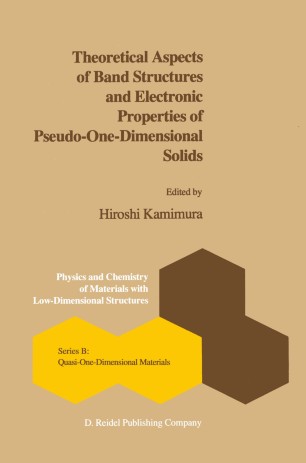 Part of the Physics and Chemistry of Materials with Low-Dimensional Structures book series (PCMB, volume 4)

This volume presents a sequence of articles which describe the theoretical treat­ ments of investigating the fundamental features in the electronic structures and properties of typical quasi-one-dimensional solids; organic conductor TTF-TCNQ, polyacetylene, metallic and superconducting polymer (SN)n and linear chain chal­ cogenides and halides of transition elements including NbSe3' The aim of this volume is not to present an exhaustive review but rather to touch on a selective class of problems which appear to be fundamental for typical quasi-one-dimensional solids. Thus the topics in this volume are rather confined to the key basic properties of quasi-one-dimensional systems. The quasi-one-dimensional solids are one of the most extensively investigated subjects in current physics, chemistry and materials science. These materials are unique in attracting a broad range of scientists, chemists, experimental and theore­ tical physicists, materials scientists and engineers. In 1954 Frohlich constructed a theory of superconductivity based on a one-dimensional model of moving charge density waves. In 1955 Peierls predicted that anyone-dimensional metal is unstable against the distortion of a periodic lattice so that a metal-nonmetal transition occurs at a certain temperature for a one-dimensional metal. According to these theories a gap is opened at the Fermi surfaces of one-dimensional conductors at low tempera­ tures and the charge density wave is created in connection with the occurrence of the gap.