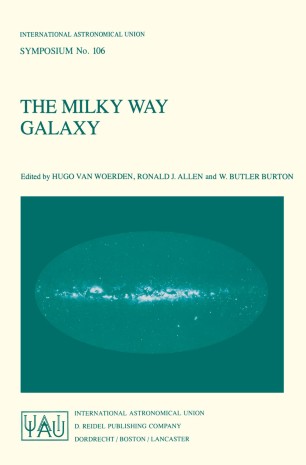 Proceedings of the 106th Symposium of the International Astronomical Union Held in Groningen, The Netherlands 30 May – 3 June, 1983

In June 1983 the Astronomical Institute of the State University of Groningen, founded by Kapteyn about 100 years ago, celebrated its one-hundredth anniversary. At the suggestion of its Chairman, R.J. Allen, the Kapteyn Institute invited the International Astronomical Union to mark the centenary by holding a Symposium on "The Milky Way Galaxy". The purpose of the Symposium was to review recent progress in the study of our Galaxy, to define current problems, and to explore prospects for future development. The Symposium programme would emphasize the large-scale characteristics of our Galaxy, and highlight both the historical development of our understanding of the Milky Way Galaxy and the importance of studies of external galaxies to this understanding. The Symposium was sponsored by four IAU Commissions: 33 (Structure and Dynamics of the Galactic System), 28 (Galaxies), 34 (Interstellar Matter) and 41 (History of Astronomy). The Scientific Organizing Committee, listed on page xviii, represented a broad range of nationalities and of expertise, including two historians of science. A meeting of the Committee, held during the IAU General Assembly at Patras, provided an excellent opportunity to discuss plan and format of the Symposium, topics and speakers; thereafter, the-Committee was regularly consulted by letter and telephone. IAU Symposium 106 was held at Groningen on 30 May - 3 June 1983, in the new building occupied by the Kapteyn Institute since January 1983. There were about 200 participants, coming from as many as 25 countries.