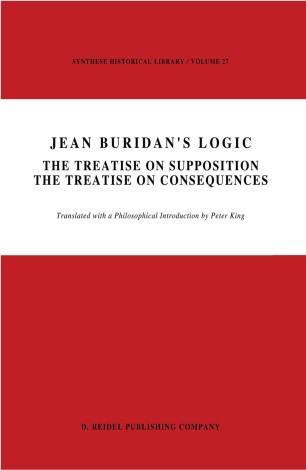 Buridan was a brilliant logician in an age of brilliant logicians, sensitive to formal and philosophical considerations. There is a need for critical editions and accurate translations of his works, for his philosophical voice speaks directly across the ages to problems of concern to analytic philosophers today. But his idiom is unfamiliar, so editions and trans­ lations alone will not bridge the gap of centuries. I have tried to make Buridan accessible to philosophers and logicians today by the introduc­ tory essay, in which I survey Buridan's philosophy of logic. Several problems which Buridan touches on only marginally in the works trans­ lated herein are developed and discussed, citing other works of Buridan; some topics which he treats at length in the translated works, such as the semantic theory of oblique terms, I have touched on lightly or not at all. Such distortions are inevitable, and I hope that the idiosyncracies of my choice of philosophically relevant topics will not blind the reader to other topics of value Buridan considers. My goal in translating has been to produce an accurate renaering of the Latin. Often Buridan will couch a logical rule in terms of the grammatical form of a sentence, and I have endeavored to keep the translation consistent. Some strained phrases result, such as "A man I know" having a different logic from "I know a man. " This awkwardness cannot always be avoided, and I beg the reader's indulgence. All of the translations here are my own.