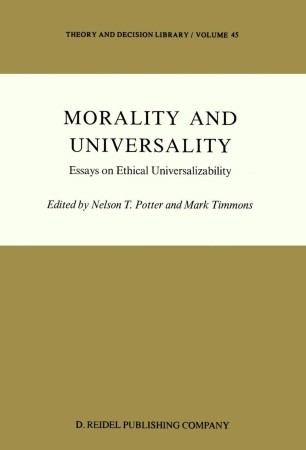 In the past 25 years or so, the issue of ethical universalizability has figured prominently in theoretical as well as practical ethics. The term, 'universaliz­ ability' used in connection with ethical considerations, was apparently first introduced in the mid-1950s by R. M. Hare to refer to what he characterized as a logical thesis about certain sorts of evaluative sentences (Hare, 1955). The term has since been used to cover a broad variety of ethical considerations including those associated with the ideas of impartiality, consistency, justice, equality, and reversibility as well as those raised in the familar questions: 'What if everyone did that?' and 'How would you like it if someone did that to you? But this recent effloresence of the use of the term 'universalizability' is something that has deep historical roots, and has been central in various forms to the thinking about morality of some of the greatest and most influential philosophers in the western tradition. While the term is relatively new, the ideas it is now used to express have a long history. Most of these ideas and questions have been or can be formulated into a principle to be discussed, criticized, or defended. As we discuss these ideas below this prin­ ciple will be stated on a separate numbered line. The concepts of justice and equality were closely linked in Greek thought. These connections between these two concepts are apparent even in two authors who were hostile to the connection, Plato and Aristotle.