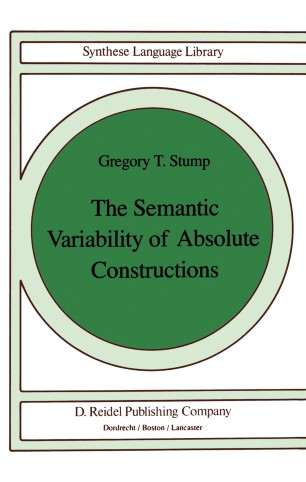 The Semantic Variability of Absolute Constructions

The goal of this book is to investigate the semantics of absolute constructions in English; specifically, my object is to provide an explanation for the semantic variability of such constructions. As has been widely noted in traditional grammatical studies of English, free adjuncts and absolute phrases have the ability to playa number of specific logical roles in the sentences in which they appear; yet, paradoxically, they lack any overt indication of their logical connection to the clause which they modify. How, then, is the logical function of an absolute construction determined? In attempting to answer this question, one must inevitably address a number of more general issues: Is the meaning assigned to a linguistic expression necessarily determined by linguistic rules, or can the grammar of a language in some cases simply underdetermine the interpretation of expressions? Are the truthconditions of a sentence ever sensitive to the inferences of language users? If so, then is it possible to maintain the validity of any really substantive version of the Compositionality Principle? These are, of course, issues of great inherent interest to anyone concerned with the formal syntax and semantics of natural language, with the philosophy of language, or with language processing. The descriptive framework assumed throughout is the semantic theory developed by Richard Montague (1970a, 1970b, 1973) and his followers. (For a very thorough introduction to Montague semantics, the reader may refer to Dowty, Wall and Peters (1981 ).