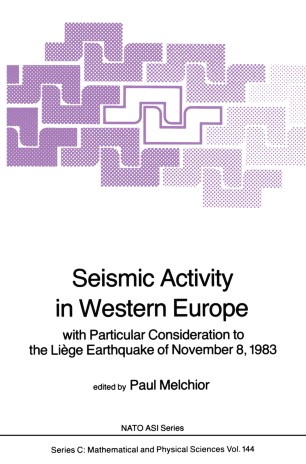 with Particular Consideration to the Liège Earthquake of November 8, 1983

A damaging earthquake with intensity VII MSK and local magni= tude 5. 1 occurred on November 8, 1983, at 0:49 GMT near the Belgium town of Liege in the border region between Belgium, Germany and the Netherlands. This most severe earthquake in the northwestern part of Central Europe since more than thirty years has well been recorded by the dense seismic station network in West Germany which consists of more than twenty stations situated in the Lower Rhine Embayment and in the adjoining Rhenish Massif. Most of the stations are equipped with modern digital recording systems. Thus high-quality seismograms are available from the region east and southeast of the epicenter covering a distance range between 70 km and 144 km. From these data the source characteristics of the Liege mainshock and of its largest after= shock have been determined in order to get more information on the seismotectonic processes causing the Liege events. 2. Seismic Station Network During the period of 1976 to 1982 the seismic station network in the Lower Rhine Embayment and in the Rhenish Massif was consi= derably enlarged and mostly equipped with digital recording systems (Figure 1). At present there are more than twenty stations in operation. Most of them are operated by the Department of Earthquake Geology of the Geological Institute of the University of Cologne and the Geo= logical Survey of Nordrhein-Westfalen at Krefeld.