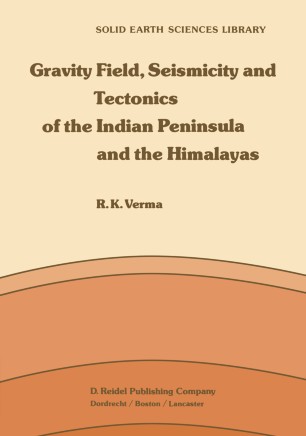 Gravity Field, Seismicity and Tectonics of the Indian Peninsula and the Himalayas

Recent developments in Science and Technology have removed the boundaries betwe~n the so-called 'fundamental' and 'applied' fields of research. This has been particularly evident in the rapidly expanding geophysical sciences with their far reaching applications. Fundamental geophysical studies of surface, subsurface and crustal structures where gravity investigations play an important role, are of immediate potential importance in defining major structural features or geological units which may control or influence the development of metallogenic provinces, petroleum potential areas or coal fields. Gravity studies in India have a long history and tradition. The earliest gravity measurements were made with two brass pendulums loaned by the Royal Society of England, when Basevi and Heaviside established 30 gravity pendulum stations between Cape Comorin and Ladakh during 1865 to 1873. Over the subsequent years, large areas of the country have been systematically covered through gravimeters and a number of regional and detailed studies have been undertaken by various agencies like Survey of India, Geological Survey of India (GSI), Oil and Natural Gas Commission (ONGC), National Geophysical Research Institute (NGRI) and a number of universities. Assistance was provided by late Prof. G. P. Woollard and his former students Muckenfuss, Bonini, Shankaranarayan and Murali Manghnani, who have connected India to the international gravity net work. Gravity studies carried out by the Survey of India have been of great value in geodetic studies.