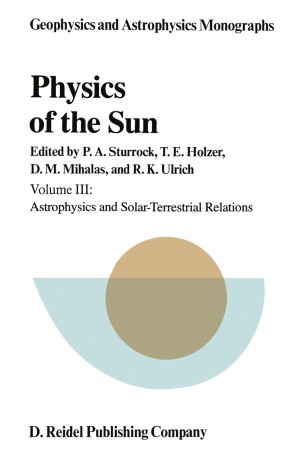 Physics of the Sun

This volume, together with its two companion volumes, originated in a study commis­ sioned by the United States National Academy of Sciences on behalf of the National Aeronautics and Space Administration. A committee composed of Tom Holzer, Dimitri Mihalas, Roger Ulrich and myself was asked to prepare a comprehensive review of current knowledge concerning the physics of the sun. We were fortunate in being able to persuade many distinguished scientists to gather their forces for the preparation of 21 separate chapters covering not only solar physics but also relevant areas of astrophysics and solar-terrestrial relations. It proved necessary to divide the chapters into three separate volumes that cover three different aspects of solar physics. Volumes 1 and 2 are concerned with 'The Solar Interior' and with 'The Solar Atmosphere'. This volume, devoted to 'Astrophysics and Solar-Terrestrial Relations', focuses on problems of solar physics from these two different but complementary perspectives. The emphasis throughout these volumes is on identifying and analyzing the relevant physical processes, but each chapter also contains a great deal of descriptive material. In preparing our material, the authors and editors benefited greatly from the efforts of a number of scientists who generously agreed to review individual chapters. I wish therefore to take this opportunity to thank the the following individuals for this valuable contribution to our work: S. K. Antiochos, E. H. Avrett, J. N. Bahcall, C. A. Barnes, G. Bicknell, D. Black, M. L. Blake, P. Bodenheimer, F. H. Busse, R. C. Canfield, T. R.