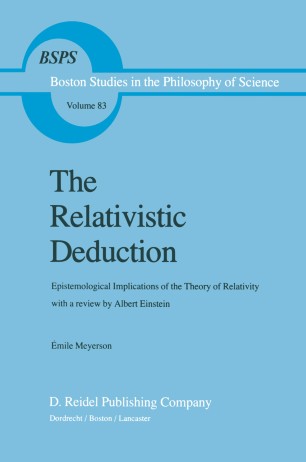 Epistemological Implications of the Theory of Relativity

Part of the Boston Studies in the Philosophy of Science book series (BSPS, volume 83)

When the author of Identity and Reality accepted Langevin's suggestion that Meyerson "identify the thought processes" of Einstein's relativity theory, he turned from his assured perspective as historian of the sciences to the risky bias of contemporary philosophical critic. But Emile Meyerson, the epis­ temologist as historian, could not find a more rigorous test of his conclusions from historical learning than the interpretation of Einstein's work, unless perhaps he were to turn from the classical revolution of Einstein's relativity to the non-classical quantum theory. Meyerson captures our sympathy in all his writings: " . . . the role of the epistemologist is . . . in following the development of science" (250); the study of the evolution of reason leads us to see that "man does not experience himself reasoning . . . which is carried on unconsciously," and as the summation of his empirical studies of the works and practices of scientists, "reason . . . behaves in an altogether predict­ able way: . . . first by making the consequent equivalent to the antecedent, and then by actually denying all diversity in space" (202). If logic - and to Meyerson the epistemologist is logician - is to understand reason, then "logic proceeds a posteriori. " And so we are faced with an empirically based Par­ menides, and, as we shall see, with an ineliminable 'irrational' within science. Meyerson's story, written in 1924, is still exciting, 60 years later.