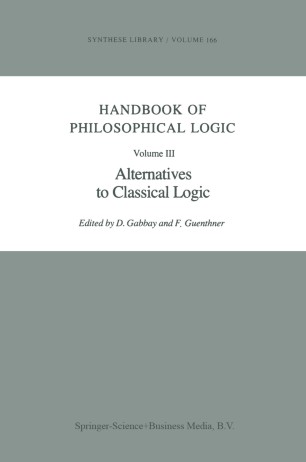 This volume presents a number of systems of logic which can be considered as alternatives to classical logic. The notion of what counts as an alternative is a somewhat problematic one. There are extreme views on the matter of what is the 'correct' logical system and whether one logical system (e. g. classical logic) can represent (or contain) all the others. The choice of the systems presented in this volume was guided by the following criteria for including a logic as an alternative: (i) the departure from classical logic in accepting or rejecting certain theorems of classical logic following intuitions arising from significant application areas and/or from human reasoning; (ii) the alternative logic is well-established and well-understood mathematically and is widely applied in other disciplines such as mathematics, physics, computer science, philosophy, psychology, or linguistics. A number of other alternatives had to be omitted for the present volume (e. g. recent attempts to formulate so-called 'non-monotonic' reason­ ing systems). Perhaps these can be included in future extensions of the Handbook of Philosophical Logic. Chapter 1 deals with partial logics, that is, systems where sentences do not always have to be either true or false, and where terms do not always have to denote. These systems are thus, in general, geared towards reasoning in partially specified models. Logics of this type have arisen mainly from philo­ sophical and linguistic considerations; various applications in theoretical computer science have also been envisaged.