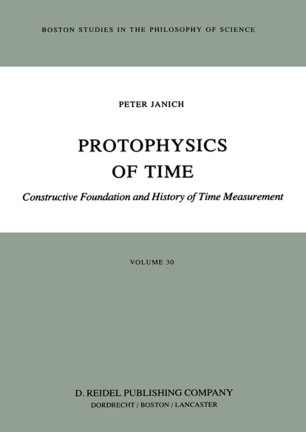 Part of the Boston Studies in the Philosophy of Science book series (BSPS, volume 30)

For protophysics, the fascinating and impressive constructive re-establish­ ment of the foundations of science by Professor Paul Lorenzen, working with his colleagues and students of the Erlangen School, no task is more central than to.furmulate a theoretical understanding of the practical art of measurement of time. We are pleased, therefore, to have a new third edition of Peter Janich's masterful monograph on the protophysics of time, available in this English translation within the Boston Studies. We also look forward to the Boston University Symposium on protophysics in april of this year within which the full program of protophysics will be critically examined by German and American physicists and philosophers, supporters and critics. We are also grateful to Paul Lorenzen for contributing his powerful instructive essay on the 'axiomatic and constructive method' which intro­ duces this book. March 1985 ROBERT S. COHEN Center for the Philosophy and History of Science Boston University MARX W. WARTOFSKY Department of Philosophy Barnch College City University of New York vii PAUL LORENZEN CONSTRUCTIVE AND AXIOM A TIC METHOD Mathematics is like a big building with many apartments. We have at least Arithmetic and Analysis, Algebra and Topology - and we have Geometry and Probability-Theory. Very often the tenants of these different apartments seem not to understand each other. The Bourbaki movement promised a new unity of Mathematics by admit­ ting only the axiomatic method of Hilbert as genuine mathematical.