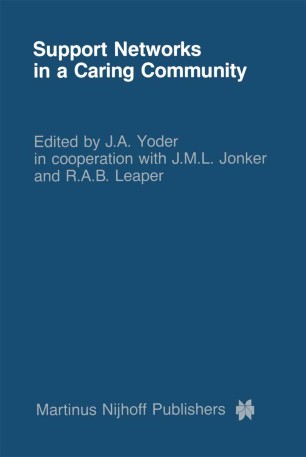 Support Networks in a Caring Community

The historic Binnenhof, seat of the Dutch government in The Hague, provided the setting (January 1985) for a conference in which participants from eleven countries met to consider the theme: Support networks in a caring community: research and policy, fact and fiction. At the outset, conference leadership - provided by Professors J.M.L. Jonker (The Netherlands) and R.A.B. Leaper (United Kingdom) urged the conferees not to allow their enthusiasm for informal support networks to combine with the pervasive awareness of the failures of welfare states into a simplistic stance of advocacy, with a consequent appeal to politicians to direct state funds accordingly. Legitimate criticisms of the responses of welfare states to the needs of citizens were to be seen as the context for discussion, not the substance of conference deliberations. More specifically, if it is now apparent to many people that governmental assistance of individuals with social needs can lead to an undesirable dependency on the part of increasingly passive citizens, that awareness does not lend logical support to an ideological position that governmental expenditures are pern~c~ous per se - to be replaced as rapidly as possible by a return to reliance on self, family, friends and associations that are developed voluntarily and financed by those who are sufficiently interested.