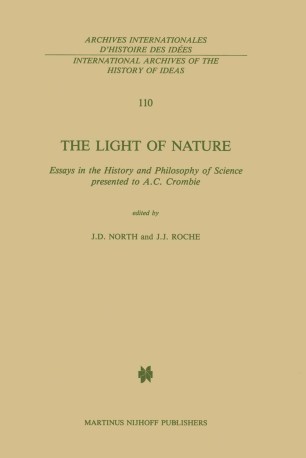 The Light of Nature

Essays in the History and Philosophy of Science presented to A.C. Crombie

Part of the International Archives of the History of Ideas book series (ARCH, volume 110)

This volume of essays is meant as a tribute to Alistair Crombie by some of those who have studied with him. The occasion of its publication is his seven­ tieth birthday - 4 November 1985. Its contents are a reflection - or so it is hoped - of his own interests, and they indicate at the same time his influence on subjects he has pursued for some forty years. Born in Brisbane, Australia, Alistair Cameron Crombie took a first degree in zoology at the University of Melbourne in 1938, after which he moved to Je­ sus College, Cambridge. There he took a doctorate in the same subject (with a dissertation on population dynamics - foreshadowing a later interest in the history of Darwinism) in 1942. By this time he had taken up a research position with the Ministry of Agriculture and Fisheries in the Cambridge Zoological La­ boratory, a position he left in 1946, when he moved to a lectureship in the his­ tory and philosophy of science at University College, London. H. G. Andrewa­ ka and L. C. Birch, in a survey of the history of insect ecology (R. F. Smith, et al. , History of Entomology, 1973), recognise the importance of the works of Crombie (with which they couple the earlier work of Gause) as the principal sti­ mulus for the great interest taken in interspecific competition in the mid 194Os.