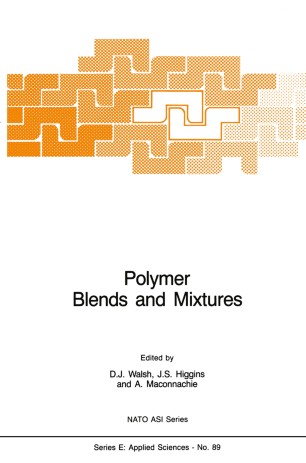 A couple of years ago a small group of people began discus­ sing the possibility of running an advanced summer school in the area of polymer blends. There had been a number of recent advan­ ces in this field, and given the considerable interest in these new polymeric materials, we thought such a meeting would be well received both by industry and academia. We wanted it to contain a wide range of background science and technology and also up to date recent advances in the field. It became clear as the discus­ sion progressed that the experts in the field were scattered over the length and breadth of Europe and North America and thus the cost of bringing them together for a summer school would necessi­ tate a high registration fee which would deter many of the research workers we wished to attract. The NATO Advanced Study Institute programme enables a subject to be covered in depth and by giving generous funds to cover lecturers' costs ensures that a wide spectrum of research workers can attend. We decided to apply to NATO and this book contains the results of our request. The ASI was funded under the 'Double-Jump' Programme which is not a new Olympic event but a way of supporting courses on sub­ jects of direct industrial interest. The Institute was also backed by donations from several companies and approximately half those attending were from industrial organisations.