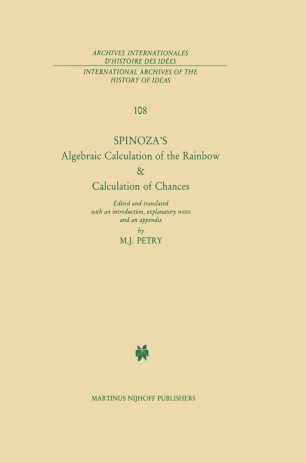 A. THE TEXT The main importance of these two treatises lies in the insight they provide into Spinoza's conception of the relation between mathematics and certain disciplines not touched upon elsewhere in his major writings. The mathematics they involve are not the as those of the Ethics however, and the precise connection same between the geometrical order of this work and these excursions into optics and probability is by no means obvious. Add to this difficulty the knotty problems presented by their editorial his­ tory, dating and scientific background, and it is not perhaps surprising that in spite of the fact that they provide such an excellent illustration of Spinoza's reaction to certain important developments in the history of physics and mathematics, they should not, so far, have attracted much attention. They were first published in 1687 by Levyn van Dyck (d. 1695), official printer to the town council in The Hague. Printing anything by Spinoza was not without its risks, and it is probably significant that during the same year van Dyck should also have published a lengthy and elaborate refutation of Spinozism by 1 the pious and eccentric physician ]. F. Helvetius. Spinoza's name was omitted from the title-page, possibly because the editor or publisher thought that his reputation as an atheist might prejudice the sale of the booklet, and it was not until 1860 that the Amsterdam bookseller Frederik Muller (1817-1881) identified him as its author.