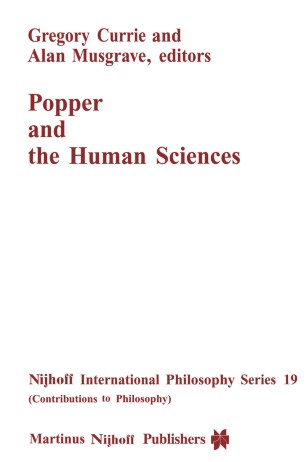 Popper and the Human Sciences

Although Sir Karl Popper's contributions to a number of diverse areas of philosophy are widely appreciated, serious criticism of his work has tended to focus on his philosophy of the natural sciences. This volume contains twelve critical essays on Popper's contribution to what we have called the 'human sciences' , a category broad enough to include not only Popper's views on the methods of the social sciences but also his views on the relation of mind and body, Freud's psychology, and the status of cultural objects. Most of our contributors are philosophers whose own work stands outside the Popperian framework. We hope that this has resulted in a volume whose essays confront not merely the details of Popper's argu­ ments but also the very presuppositions of his thinking. With one exception, the essays appear here for the first time. The exception is L.J. Cohen's paper, which is a revised and considerably expanded ver­ sion of a paper first published in the British Journalfor the Philosophy of Science for June 1980. We would like to thank Loraine Hawkins and Jane Hogg for their editorial assistance and June O'Donnell for typing various manuscripts and all the correspondence which a volume of essays entails.