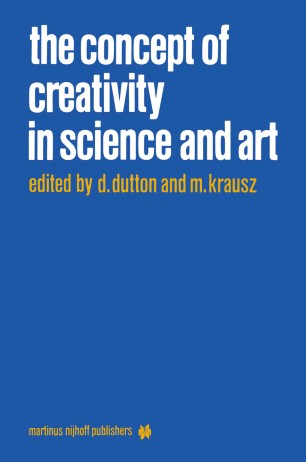 The Concept of Creativity in Science and Art

This third volume of American University Publications in Philos­ ophy continues the tradition of presenting books in the series shaping current frontiers and new directions in phi. osophical reflection. In a period emerging from the neglect of creativity by positivism, Professors Dutton and Krausz and their eminent colleagues included in the collection challenge modern philosophy to explore the concept of creativity in both scientific inquiry and artistic production. In view of the fact that Professor Krausz served at one time as Visiting Professor of Philosophy at The American University we are especially pleased to include this volume in the series. HAROLD A. DURFEE, for the editors of American University Publications in Philosophy EDITORS' PREFACE While the literature on the psychology of creativity is substantial, surprisingly little attention has been paid to the subject by philos­ ophers in recent years. This fact is no doubt owed in 'part to the legacy of positivism, whose tenets have included a sharp distinction between what Hans Reichenbach called the context of discovery and the context of justification. Philosophy in this view must address itself to the logic of justifying hypotheses; little of philo­ sophical importance can be said about the more creative business of discovering them. That, positivism has held, is no more than a merely psychological question: since there is no logic of discovery or creation, there can be no philosophical reconstruction of it.