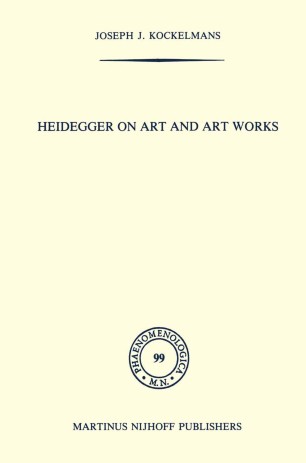 Heidegger on Art and Art Works

This book grew from a series of lectures presented in 1983 in the context of the Summer Program in Phenomenology at The Pennsylvania State University. For these lectures I made use of notes and short essays which I had written between 1978 and 1982 during interdisciplinary seminars on Heidegger's later philosophy in general, and on his philosophy of language and art in particular. The participants in these seminars consisted of faculty members and graduate students concerned with the sciences, the arts, literature, literary criticism, art history, art education, and philosophy. On both occasions I made a special effort to introduce those who did not yet have a specialized knowledge of Heidegger's philosophy, to his later way of thinking. In this effort I was guided by the conviction that we, as a group, had to aim for accuracy, precision, clarity, faithfulness, and depth, while at the same time taking distance, comparing Heidegger's views with ideas of other philosophers and thinkers, and cultivat­ ing a proper sense of criticism. Over the years it has become clear to me that among professional philoso­ phers, literary critics, scholars concerned with art history and art education, and scientists from various disciplines, there are many who are particularly interested in "Heidegger's philosophy of art". I have also become convinced that many of these dedicated scholars often have difficulty in understanding Heidegger's lectures on art and art works. This is understandable.