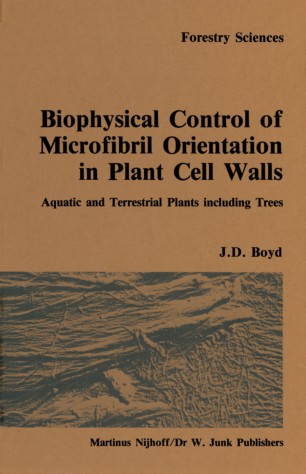 Aquatic and terrestrial plants including trees

Within the extreme diversity of aquatic and terrestrial plant genera, each has characteristic cell wall forms. A number of hypotheses have been advanced to explain differences in microfibril arrangements across anyone such wall. Of those, only the 'multinet' theory, which involves the postulation of reorientation of microfibrils caused by cell extension, now has a substantial number of ad­ herents. However, many scientists are sceptical of its validity; obviously it is incompatible with various observed microfibril arrangements. The tenet of this study is that any such hypothesis can be valid only if it is applicable to all plant forms and wall types. Initially, reanalyses are made of data claimed to confirm justification for multi net postulations. The results show that previous deductions from those data, in support of multinet, are subject to serious challenge. Similarly, a re-examination of the observations, which inspired the multinet theory, shows they have a more logical explanation. Herein, it is concluded that cell wall development involves biophysical factors, which neces­ sarily prevent multinet's postulated large reorientations of microfibrils, after their formation. Unfortunately the previously most recent published theory, which is based on the absence of reorientation during extension, fails to answer the fundamental question of how alternating orientations between lamellae are controlled, or explain variations in thickness of wall layers. Extensive published data are used to identify forces involved in cell wall development.