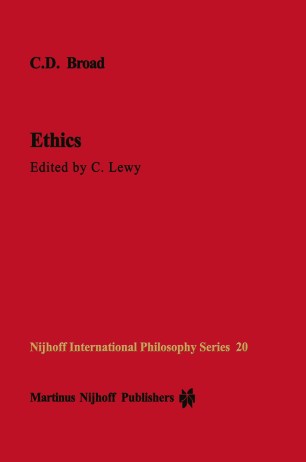 This volume contains C. D. Broad's Cambridge lectures on Ethics. Broad gave a course of lectures on the subject, intended primarily for Part I of the Moral Sciences Tripos, every academic year from 1933 - 34 up to and in­ cluding 1952 - 53 (except that he did not lecture on Ethics in 1935 - 36). The course however was frequently revised, and the present version is es­ sentially that which he gave in 1952 - 53. Broad always wrote out his lectures fully beforehand, and the manuscript on Ethics, although full of revisions, is in a reasonably good state. But his handwriting is small and close and in places difficult to decipher. I therefore fear that some words may have been misread. There was an additional complication. In the summer of 1953 Broad revised and enlarged two sections of the course, namely the section on "Moore's theory" and that on "Naturalistic theories" (both sections occur in Chapter 4). The revised version of the section on Moore is undoubtedly superior to the earlier version, and I have therefore included it. But in my opinion this is not true of the new version of the section on naturalistic theories: although more comprehensive than the earlier version, it is not only repetitive in itself, but also repeats, sometimes almost verbatim, passages which occur elsewhere in the lectures. In brief, the new version is not fully integrated with the rest of the course.