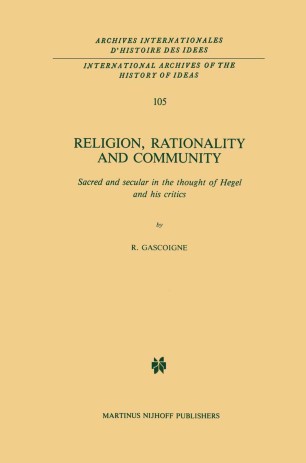 Sacred and secular in the thought of Hegel and his critics

This study is an attempt to examine the relationships between religious belief and the humanism of the Enlightenment in the philosophy of Hegel and of a group of thinkers who related to his thought in various ways during the 1840's. It begins with a study of the ways in which Hegel attempted to evolve a genuinely Christian humanism by his demonstration that the modern understanding of man as a free and rational subject derived its strength and validity from the union of God and human existence in the incarnation. The rest of this study is con­ cerned with two different forms of opposition to Hegel: first, the criti­ cal discipleship of the Young Hegelians and Moses Hess, who insisted that Hegel's notion of Christian humanism was false because religious belief was necessarily inimical to a clear consciousness of social evil and the determination to abolish it; second, the religious opposition to the Enlightenment in the thought of Schelling and Kierkegaard, which emphasized God's transcendence to human reason and the insig­ nificance of secular history. In the years leading up to the revolution of 1848, Hegel's synthesis was rejected in favour of the assertion of atheistic humanism or religious otherworldliness. Chapter One, after discussing the young Hegel's critique of the social and political effects of Christianity, examines the union of religi­ ous belief, speculative philosophy and the rational state in Hegel's mature system.