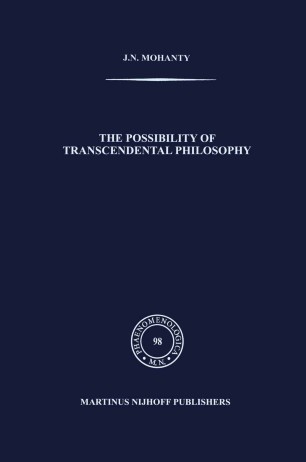 The Possibility of Transcendental Philosophy

These essays span a period of fourteen years. The earliest was written in 1960, the latest in 1983. They all represent various attempts to understand the motives and the central concepts of Husserl's transcen­ dental phenomenology, and to locate the latter in the background of other varieties of transcendental philosophy. Implicitly, they also con­ tain a defense of transcendental philosophy, and make attempts to respond to the more familiar criticisms against it. It is hoped that they will contribute to a better understanding not only of Husserl's transcen­ dental phenomenology but also of transcendental philosophy in gener­ al. The ordering of the essays is not chronological. They are rather divided thematically into three groups. The first group of six essays is concerned with relating Husserlian phenomenology to more contem­ porary analytic concerns: in fact, the opening essay on Husserl and Frege establishes a certain continuity of concern with my last published book with that title. Of these, Essay 2 was written for an American Philosophical Association, Eastern Division symposium in which the other symposiast was John Searle. The discussion in that symposium concentrated chiefly on the relation between intentionality and causali­ ty - which led me to write Essay 6, later read as the Gurwitsch Memo­ rial Lecture at the Society for Phenomenology and Existential Philos­ ophy meetings in 1982 at Penn State.