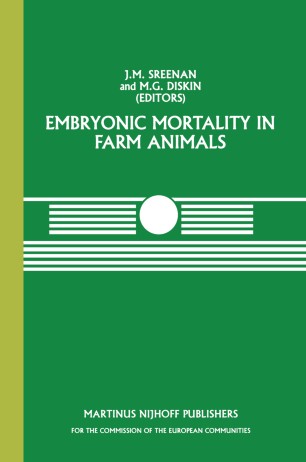 Reproductive wastage is a major inefficiency in all livestock production with embryonic mortality accounting for a major portion of this loss. Accordingly the Commission of the European Communities encouraged the organisation of a seminar on embryonic mortality in farm animals which was held in Brussels on the 11th and 12th of December 1984. This book contains the text of the papers, discussions and final summary presented at that Seminar. As a background to the Seminar, the extent and timing of embryonic loss was described for farm animals. Particular consideration was then given to the various mechanisms and signals, both embryonic and uterine in origin, that are so far known to be involved in the establishment of pregnancy. Possible causes of embryonic death including physiological, endocrinological, genetic and immunological components were outlined and discussed. The final summary contains general conclusions from the Seminar and recommendations for future research work on this topic. J.M. Sreenan M.G. Diskin July 1985. ******************** THE EXTENT AND TIMING OF EMBRYONIC MORTALITY IN THE COW J. M. Sreenan & M. G. Diskin, The Agricultural Institute, Belclare, Tuam, Galway, Ireland ABSTRACT The extent and timing of embryonic mortality in heifers, normal cows and repeat breeder cows has been reviewed.