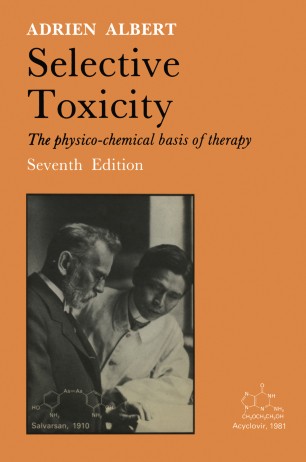 The physico-chemical basis of therapy

This book is about selectively toxic agents. That is to say, it is about those substances that affect certain cells without harming others, even when they are close neighbours. Toxicity need not be fatal. It can be made easily reversible, as is the case with general anaesthetics. Selective toxicity covers an immense field: most of the drugs used for treating illness in man and his economic animals, as well as all of the fungicides, insecticides, and weed killers that are used in agriculture. Essentially, this book is a discussion of the physical and chemical means which contribute to selectivity, and this is the basis of molecular pharmacology. _Selective Toxicity began as a course of lectures that Professor F. G. Young encouraged me to give in University College London, in 1948 and again in 1949. The first edition appeared in 1951, as a very small book because little was then known about the factors that provide selectivity. Since those early days, the subject has undergone tremendous development. At first, industry was un­ receptive to the word 'toxicity', however qualified! Yet the market was being supplied with biologically powerful substances of which several had the potential to cause harm. This aspect was brought to light by two events of the early 1960s. The first of these was the discovery that a sedative, thalidomide, administered to expectant mothers, after what was then considered to be adequate testing, had caused permanent deformities in about 10000 children.