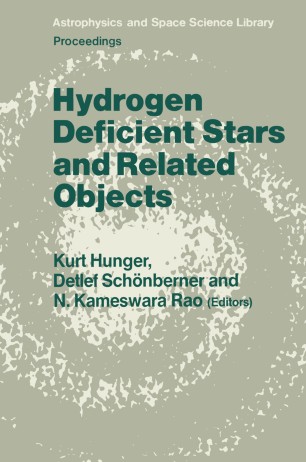 Proceeding of the 87th Colloquium of the International Astronomical Union Held at Mysore, India, 10–15 Nevember 1985

The first helium star was discovered in 1942, the first scientific meeting on the subject, however, took place in 1985. The meeting was hence long overdue for, in the meantime, a substantial amount of material had been accumulated by a rather small, but active scientific community. Hence, it appeared necessary to review the field in order to define the subject, assess its present status and discuss future developments. Hydrogen deficiency is a widespread phenomenon, occurring in a large variety of stellar and nonstellar objects. It can be readily detected in B stars as these exhibit both hydrogen and helium lines, if the elements are present in appreciable amounts. It becomes less manifest in cool stars, where the temperature is too low to excite helium and where one has to devise indirect methods for proving hydrogen deficiency. Clearly, it was not possible to discuss the whole complex of hydrogen deficiency, i.e. in both stars and diffuse matter, but rather to concentrate on the issue of helium stars.