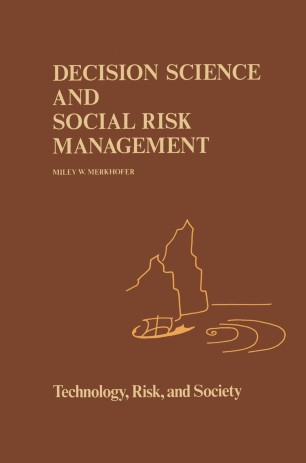 A Comparative Evaluation of Cost-Benefit Analysis, Decision Analysis, and Other Formal Decision-Aiding Approaches

Economists, decision analysts, management scientists, and others have long argued that government should take a more scientific approach to decision making. Pointing to various theories for prescribing and rational­ izing choices, they have maintained that social goals could be achieved more effectively and at lower costs if government decisions were routinely subjected to analysis. Now, government policy makers are putting decision science to the test. Recent government actions encourage and in some cases require government decisions to be evaluated using formally defined principles 01' rationality. Will decision science pass tbis test? The answer depends on whether analysts can quickly and successfully translate their theories into practical approaches and whether these approaches promote the solution of the complex, highly uncertain, and politically sensitive problems that are of greatest concern to government decision makers. The future of decision science, perhaps even the nation's well-being, depends on the outcome. A major difficulty for the analysts who are being called upon by government to apply decision-aiding approaches is that decision science has not yet evolved a universally accepted methodology for analyzing social decisions involving risk. Numerous approaches have been proposed, including variations of cost-benefit analysis, decision analysis, and applied social welfare theory. Each of these, however, has its limitations and deficiencies and none has a proven track record for application to govern­ ment decisions involving risk. Cost-benefit approaches have been exten­ sively applied by the government, but most applications have been for decisions that were largely risk-free.