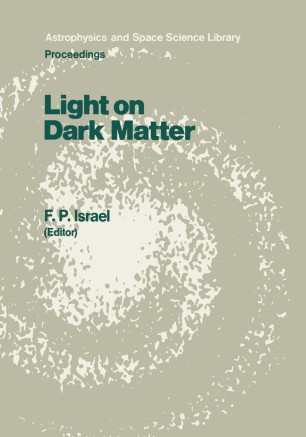 Proceedings of the First IRAS Conference, Held in Noordwijk, the Netherlands, 10–14 June 1985

'Light on Dark Matter', held from 10-14 June 1985 in the Dutch seaside resort of Noordwijk, was the first international conference devoted to the results of the all-sky survey by the US-Dutch-UK Infra-Red Astronomical Satellite (IRAS). As such, it was a hommage to the scientists, engineers and technicians who conceived, built and operated this extremely successful satellite. That this was generally felt to be the case, was proven by the large number of participants (over 200 from seventeen different nations), the li vely discussions, and the great variety of topics presented during the meeting. All this not withstanding a typical Dutch summer: gale-force winds, heavy cloud cover, and meter-high surf crashing onto a beach on which only the hardy ventur. ed. Most participants contented themselves by watching the lonely seagulls patrolling the North Sea coastline through the panoramic windows of the conference center. Parallel to the IRAS Conference, a Workshop on Infrared Properties of Interstellar Grains was organized by J. M. Greenberg of the Leiden Laboratory Astrophysics Group: a busy shuttling of participants between the Workshop room and the Main Conference Hall showed that many found it hard to choose. A large number of people were invol ved in making the Conference a success: in the first place the scientific organizers with their valuable advice and the conference speakers, among which I would like to mention Dr. J. H.