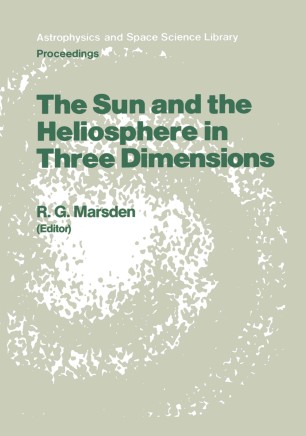 The Sun and the Heliosphere in Three Dimensions

The 19th ESLAB Symposium on 'The Sun and the Heliosphere in Three Dimensions' was held in Les Diablerets (Switzerland) on 4-6 June 1985. Organised almost exactly ten years after the Goddard Space Fl i ght Center Sympos i um dea 1 i ng with the Sun and the i nterp 1 anetary medium in three dimensions, the aim of this Symposium was not only to review the progress made in understanding the three-dimensional structure and dynamics of the heliosphere, but also to look ahead to the scientific return to be expected from the Ulysses mission. Scheduled for launch in May 1986, the scientific instrumentation on board Ulysses will shed light on the conditions and processes occurring away from the ecliptic plane, thereby adding literally a new dimension to our understanding of the only stellar plasmasphere to which we have direct access. The scientific programme of the Symposium was built around a series of invited review papers dealing with aspects of the corona and its influence on the interplanetary medium via transient ejecta, the solar wind, energetic solar particles and galactic cosmic rays, interplanetary dust and neutral gas. These invited talks were supplemented by a number of contributed and poster papers. With the exception of three contributed talks and Wibberenz' review of coronal and acceleration of energetic particles, all papers propagation presented at the Symposium are included in this volume.