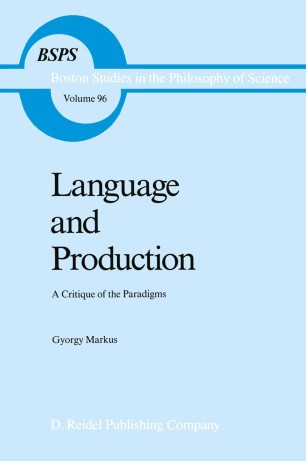 A Critique of the Paradigms

Part of the Boston Studies in the Philosophy of Science book series (BSPS, volume 96)

In Language and Production, Gyorgy Markus presents us with a pro­ found critique of contemporary social theory: of the philosophy and methodology of the social sciences; of the philosophy of language; of hermeneutics and critical theory; and finally, of Marx and of Marxisms. The sweep of Markus' project is complemented by the extraordinary detail of his analysis and the elaborately developed argument which gives the work its clear logical structure: it is a dialectical work. Markus begins with a critique of the paradigm of language and of that scientific ra­ tionality modeled on language, as frameworks for the understanding of social reality, and for a rational 'science of society' . After revealing what he takes to be the essential failure of that paradigm in its positivist ver­ sion (in the work of Sir Karl Popper, who, he argues, remains within the positivist framework despite his differences with other positivists) - Markus examines the alternative interpretations of that paradigm in the hermeneutic tradition from Dilthey through Heidegger and Gadamer, and then in the structural anthropology of Claude Levi-Strauss and in the philosophy of language of Ludwig Wittgenstein. In all of these approaches, Markus sees a systematic flaw in the at­ tempt to frame human action as one or another form of linguistic prac­ tice, or even to read human self-constitution as essentially linguistic.