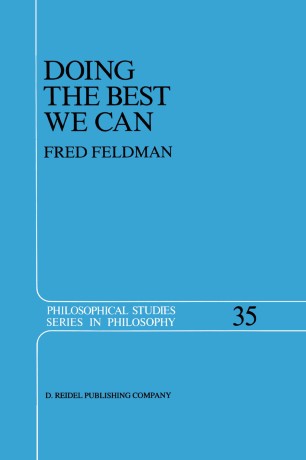 Doing the Best We Can

An Essay in Informal Deontic Logic

Several years ago I came across a marvelous little paper in which Hector-Neri Castaneda shows that standard versions of act utilitarian­ l ism are formally incoherent. I was intrigued by his argument. It had long seemed to me that I had a firm grasp on act utilitarianism. Indeed, it had often seemed to me that it was the clearest and most attractive of normative theories. Yet here was a simple and relatively uncontrover­ sial argument that showed, with only some trivial assumptions, that the doctrine is virtually unintelligible. The gist of Castaneda's argument is this: suppose we understand act utilitarianism to be the view that an act is obligatory if and only if its utility exceeds that of each alternative. Suppose it is obligatory for a certain person to perform an act with two parts - we can call it 'A & B'. Then, obviously enough, it is also obligatory for this person to perform the parts, A and B. If act utilitarianism were true, we appar­ ently could infer that the utility of A & B is higher than that of A, and higher than that of B (because A & B is obligatory, and the other acts are alternatives to A & B).