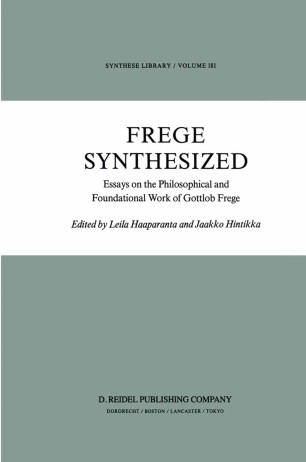 Essays on the Philosophical and Foundational Work of Gottlob Frege

cake, even though it is typically given the pride of place in expositions in Frege's semantics. As a part of this attempted reversal of emphasis, Jaakko Hintikka has also called attention to the role Frege played in convincing almost everyone that verbs for being had to be treated as multiply ambiguous between the "is" of identity, the "is" of predication, the "is" of existence, and the "is" of class-inclusion - a view that had been embraced by few major figures (if any) before Frege, with the exception of John Stuart Mill and Augustus De Morgan. Hintikka has gone on to challenge this ambiguity thesis. At the same time, Frege's role in the genesis of another major twentieth-century philosophical movement, the phenomenological one, has become an important issue. Even the translation of Frege's key term "Bedeutung" as "reference" has become controversial. The interpretation of Frege is thus thrown largely back in the melting pot. In editing this volume, we have not tried to publish the last word on Frege. Even though we may harbor such ambitions ourselves, they are not what has led to the present editorial enterprise. What we have tried to do is to bring together some of the best ongoing work on Frege. Even though the ultimate judgment on our success lies with out readers, we want to register our satisfaction with all the contributions.